It is fitting that our Christmas post for 2012 is about this artist whose life’s work is the inspiration for our efforts at Via Lucis. We visited with him again this September and spent almost the whole day with him. The bonus was that my parents Don and Lucille accompanied us on the trip and had the chance to meet the man about whom we talked so much.

We picked him up at the Convent of Notre Dame de Venière just outside of Tournus where he serves as Chaplain. He greeted PJ and myself warmly and then turned to my parents. They noticed immediately Surchamp’s true humility about himself, his life and his accomplishments. He is proud of what he has done and is pleased to talk about his work, but any praise of him personally is instantly deflected. It reminded me of last year’s visit when a visitor wanted another picture of him and Pere said with a smile, “What am I, a national monument?” PJ says that this humility comes from his understanding of the larger picture, that no matter how large his accomplishment, in light of what he sees in the world, it is just a small fragment.

Went to lunch at the Hostellerie Bressane in Cuisery, eight kilometers due east of Tournus. We had taken Pere Surchamp there last year and we knew that he enjoyed it very much.

We had asked Mme Nathalie Beaufaÿs, who runs the hotel (her husband Jean-Francis Beaufaÿs is the chef) for a nice table near the back windows and it was perfect for the five of us. The French have an understanding of how to live, and central to that understanding are meals. To share a meal is one of the key ways to get to really know a Frenchman, and even though he is a monk dedicated to simplicity and devotion in life, Surchamp is still a Frenchman and delights in the special appeals of fine French dining. He ate less this year, but with the same brio. Talk stops during the eating and resumes after the serious business of the meal has finished.

At one point we were talking about what how pleased we were to see him in such good health, and by extension, my parents who were 84 at the time. Surchamp said that we was doing well, but every year after eighty – “… ça coûte cher” – “that costs dearly.” My parents nodded in agreement. I nodded in agreement, silently amending the “eighty” to “sixty”.

After the meal we had the opportunity to go the the Basilique Saint Philibert in Tournus together. To visit this great Romanesque monument with Surchamp was a highlight of my life, frankly. To do it in the company of PJ and my parents was like the dash of perfection. We entered the church through the great heavy narthex. Surchamp remembers everything, of course, and pointed out masons’ marks and other inscriptions in the walls.

As we passed through the narthex, we stood in the western doorway and looked down the center aisle to the abbey church. Our discussion focused on the transverse barrel vaults at Saint Philibert and how they were only duplicated one other place in the world, Mont Saint Vincent, about 50 kilometers due west of Tournus.

We strolled slowly and deliberately down the south side aisle, past the famed Vierge, Notre Dame la Brune, reveling in the glory of the architecture. It was possible, by watching his eyes, to see the details that intrigued Surchamp. PJ’s analysis of Surchamp is so apt, “He sees the interaction of lights and planes, shapes and shadows. He wasn’t just shooting – most of the photography that you seem from that era, they are shooting a picture of the church. But he’s really shooting like we shoot, he’s shooting something else. He is trying to capture the church, but he’s shooting deeper than ‘I want to show someone what this place looks like.’ He’s trying to express all of these other things – the interaction of the architecture with the light, it’s multidimensional feel.”

She continues, “He’s shooting as an artist – taking the religious content aside, you can see that he is shooting it the way an artist would. Of course it’s very realistic, there’s nothing more real than architecture, but like your shot of Fontenay that I love, that’s a perfect example. There’s nothing more realistic than that, but it also wonderfully abstract, and you can look at it and see the bands of light only, it’s abstract.”

We walked around the ambulatory as he described the discovery of the mosaic floor that had been covered up for so many years.

From there,we three men walked carefully down the steep stairs into wonderful crypt. To see Surchamp in his black robes walking with his hands behind his back in that crypt was like being taken back 800 years in time. I could almost hear the plainsong chants of his Benedictine predecessors as Surchamp walked these stone floors among the strong pillars.

We mounted again up into the main floor of the abbey church and I took this photo of "Mes deux pères," "my two fathers. The photograph is horrible (cell phone in low light) but it is the one memento I have of that so moving visit. 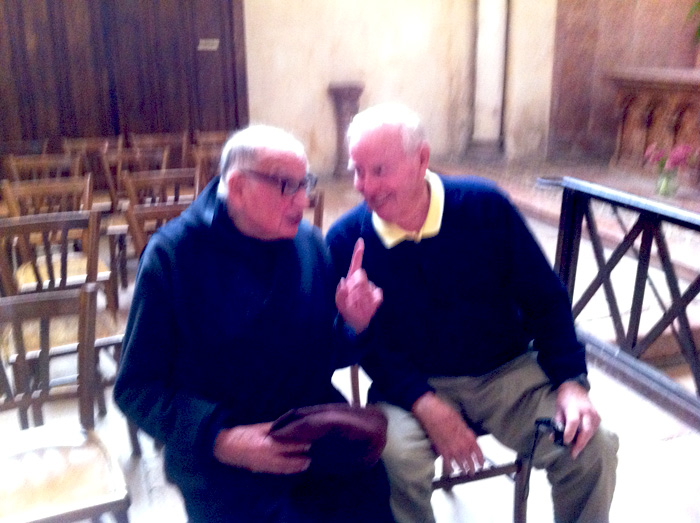 Finally we could see that Surchamp was tiring so we returned to the convent, but he insisted that we come in and have some tea. We sat around the familiar table in the crowded little room while he made tea for us and we talked later into that autumn afternoon. I remember him talking about his love for the Romanesque and how time changes our perception of these structures. He mentioned specifically how certain churches were originally approachable only by mountain paths but now can be reached by roads accessible to any automobile. “We lose the essential setting that was the purpose of the church in the first place.” I thought immediately of Saint Martin-du-Canigou and Saint-Guilhem-le-Desert. The latter certainly is now almost a tourist resort.

Finally, reluctantly, we had to leave. Outside at the gate, Surchamp held his hand firmly on my forearm as we discussed coming back to visit him again next year. He thought that perhaps he would no longer be at the Convent of Notre Dame de Venière, but would return to La Pierre Qui Vire. What a perfect completion of the circle that would be.

Driving away, my parents were delighted to have met Surchamp – “He was everything you talked about,” Lucille said. Indeed, and more, because my words can never do justice to this accomplished Benedictine monk who has become so important to our lives. “We do not reach beauty except in love, and love requires time and freedom.”

15 thoughts on “Those who precede (Part 3), Angelico Surchamp – Dennis Aubrey”

This site uses Akismet to reduce spam. Learn how your comment data is processed.

Comments on Via Lucis

“There are people who take pictures, there are photographers, and then, there is Via Lucis. This is the most incredible collection of images from Medieval churches I have yet seen. These places are amazing to start with, but what Dennis Aubrey and PJ McKey accomplish in these spaces with a camera is breathtaking.”

“How do you do it – time after time after time – beautiful photographs that need no words and beautiful words that need no photographs? Combined they transport us to the deepest place of our inner selves. Your gifts of self – an eye for finding the beauty in these ancient buildings and your ability to capture that beauty and share it with others – those are your blessings on those of us fortunate enough to know of your site and follow it.” – Jay Fredrich