Sometimes I get so sad, so depressed at the state of the world. The antics of our politicians, the naked greed of our Wall Street masters of the universe, and the sadness at seeing the land of promise and opportunity turning into the land of baristas. Sometimes I just think it is my age, but looking back, I don’t see a golden time. We have always been troubled as a people, but now we have descended further into an abyss. I despair at emerging into the light.

But then something happens to change my heart – first it was PJ who came into my life like a warming beacon. Sometimes it is the generosity and kindness of my friends who I cherish more than I can ever express. And my family (and PJ’s) are a fertile soil that nourishes the seedlings of hope and faith. Today, however, one of member of that family, my nephew Scott, is in my thoughts. 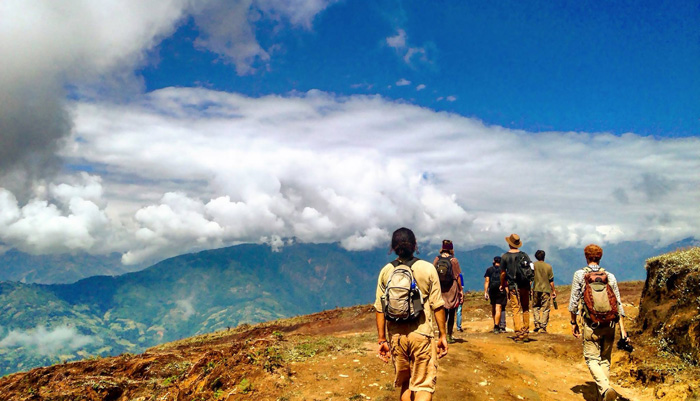 This young man trained as an engineer at Santa Clara University and immediately got a responsible and well-paying job in his field of civil engineering. But his work there was not fulfilling and he made the choice to change everything. He originally planned to get a master’s degree in Engineering for Developing Communities but decided instead to go to Nepal for a couple of months to help rebuild the country devastated by earthquakes.

He has now been there longer than two months and he is committed to the process and the country. He speaks conversational Nepalese, and his words glow with the belief that he – and we – can make a difference.

To read his own words on his mission, please read this link.

So thank you, Scott, from your perch high atop of the world, for sharing your light with this old soul.

This site uses Akismet to reduce spam. Learn how your comment data is processed.

Comments on Via Lucis

“There are people who take pictures, there are photographers, and then, there is Via Lucis. This is the most incredible collection of images from Medieval churches I have yet seen. These places are amazing to start with, but what Dennis Aubrey and PJ McKey accomplish in these spaces with a camera is breathtaking.”

“How do you do it – time after time after time – beautiful photographs that need no words and beautiful words that need no photographs? Combined they transport us to the deepest place of our inner selves. Your gifts of self – an eye for finding the beauty in these ancient buildings and your ability to capture that beauty and share it with others – those are your blessings on those of us fortunate enough to know of your site and follow it.” – Jay Fredrich